The Fleeting Intimacy of Neighbours 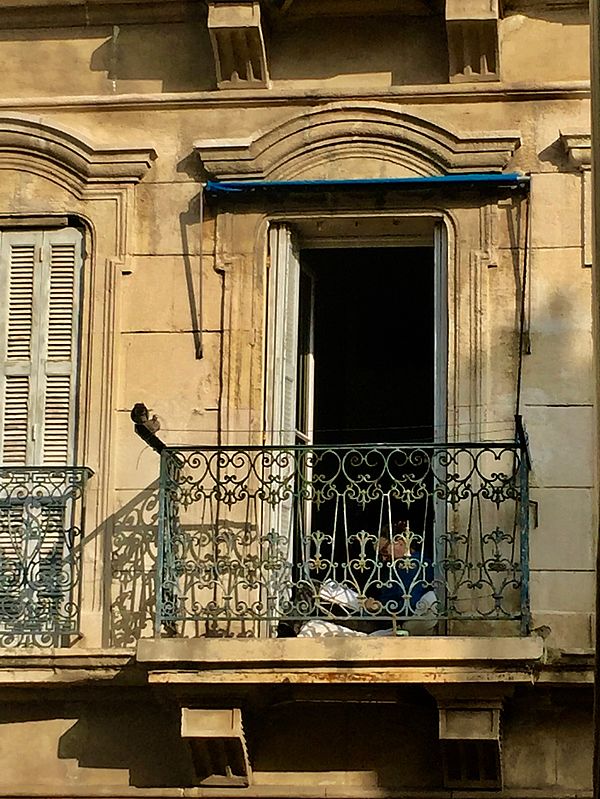 I only noticed them after the lockdown began. That first day, after pacing around my apartment for what felt like hours, I walked over to the window to look out upon the silent street below. It was mid-afternoon. That was when I saw them, in the windows of their apartments, across the street from mine. They were sitting on their balconies, hanging laundry out to dry, reading, looking at their phones, making calls, relaxing in their living rooms with windows wide open. All those people! Had they always been there?

I had arrived a month earlier, family in tow, to do archival research. We had planned to stay in Marseille until early April, and then spend a week or two in Cassis before heading back to Toronto. Soon after things began to shut down, our return tickets were cancelled. We decided we would shelter in place in Marseille, rather than scramble to book new tickets for crowded airplanes that would take us back to a city that was itself on the cusp of its own covid-19 crisis. Another complication: we had given up our apartment in Toronto and moved everything into storage before our trip. How would we find an apartment while respecting the quarantine? So we stayed in Marseille.

I should say: I never intended to become a spy. As the lockdown wore on, though, I spent a lot of time at my window, and my window-neighbours spent a lot of time at theirs. I got to know their daily habits and routines. For example, the man on the top floor of the building across from mine keeps lots of plants on his balcony. He gets up late each day, walks out onto his balcony in boxer briefs and t-shirt, stretches, and then waters each of his plants with a light blue watering can, his little rust-coloured cat at his side. On the second floor lives a young couple. They are never more than 3cm apart. They lunch together, work side-by-side, and stretch out next to each other on their small balcony to soak up the afternoon sun. In the apartment to the left of the couple lives a family with two young kids. The boy has a toy gun, and he likes to shoot people from his balcony. When he pulls the trigger, a red light flashes at the end of the barrel. (I was a little shocked the first time he fired at me, but now I fire back.)

As the days passed, I began to feel a kind of intimacy growing between all of us, a familiarity, unacknowledged but real. We knew we existed, right here on this street, and we were living this strange time together. This was exciting to me. I wanted very much to wave, or shout over and say hi, or even just give a smile-and-nod, but I held back. I decided to play it cool. Marseille is a beautiful and captivating city in my eyes, and by now it feels familiar in many ways, but I still don’t really know how or who I’m supposed to be here. My temperament and timing and mannerisms are all wrong for this place, not to mention my French. I assume familiarity with people too quickly, I smile too much, I hang back and wait for clear signs that it’s my turn to do things—cross the street, step up to the shop counter, advance in line—it confuses and annoys people. I say “j’ai hâte de...” too often because honestly, I still find it perplexing that French doesn’t easily allow me to talk about how excited I am about this and that. I’m cringing as I’m writing this description of myself, so un-French and so un-Marseillaise. Yet I will surely persist in being this over-eager person who never quite knows how to be.

Among all of my window-neighbours, the person I came to know best was the woman in the apartment directly across from mine. I still refer to her in my mind as “the woman” or “the lady”. She looked to be about 50 years old, lived alone, and conducted her days with confidence. When her tall window-doors were open and the light was right, I could see into her apartment. I could see her living room, and the kitchen in the background. It was all one room, really, with a small counter separating the two. To the left of the kitchen were bookcases; these kind of lined the entryway to her apartment. These bookcases were packed full of books, but the spines of the books did not face outward—instead, the books appeared to be stacked in piles, even shoved. Why? This puzzled me. It seemed discordant. The woman’s bedroom was off to the left of the living room and had its own window. The apartment was modest but nice, cozy.

Every morning around 10am, the woman would step out onto her balcony to make phone calls, usually wearing a thick sweater. She always looked freshly showered, which impressed me. She kept very regular meal times and slept regularly, too. The calls she made were personal—my windows were always open and I couldn’t help but hear bits of the conversation. There was an older woman she talked to almost daily; she became more formal during these conversations, calling the woman “madame” and addressing her as “vous”. She spoke slowly to this woman, and loudly. She was checking up on her.

Sometimes when the early afternoon sun hit the balcony just right, the woman would throw pillows down and sit reading a magazine. For a few days in late March, she sat with a needle and thread, making masks. Around the same time, she also started putting food out for a pair of beautiful mourning doves that sometimes stopped by our street. At first I thought she was putting out seeds, but after watching her spoon food out of a bowl, I decided it must be oatmeal. She dabbed the food carefully onto the two metal rods that held her laundry lines. Almost immediately, though, her balcony was overrun by pigeons, and a war had begun. The pigeons would dive in for food and she would shoosh them away, exasperated. The food was clearly meant for the doves, but the pigeons always managed to get most of it. Still, she kept putting the food out. The doves were sometimes able to sneak in while the pigeons were away.

Seeing the woman became habit. As I sat and worked on my computer each day, there she was. Her presence was a comfort. I wondered a lot about her pre-lockdown life. What did she like to do? What were her friends like? Did she grow up in Marseille?  How long had she lived in that apartment? I made up fantastical backstories for her, but none of them quite fit. I thought I might like to be her friend.

The only time we ever acknowledged each other was during the 8pm cheering ritual. She never missed the occasion. As she banged out a rhythm with her wooden spoon on a medium-sized pot, she would look around and meet the gaze of the other noisemakers with a smile, as if she were making a toast. Maybe some day when all of this is over, I thought, I will just do it—I will shout to her, or wave, or say hello.

And then it all ended. May 11, le déconfinement. How would this day feel, I wondered? What will the streets be like? What will people do? Will my window-neighbours behave differently now that we are no longer confined to our apartments? I got out of bed, padded to my window, opened it widely, and looked out.

The woman’s windows were shuttered. I had never seen them shuttered before, and I knew instantly that the woman had gone.

Marseille has never been stranger to me.

[Music] July 13 at 7pm: Broadcasting of the concert by The Mediterranean Youth Orchestra on #LaScèneNumérique platform of the Festival d'Aix