For twenty years, he has been the composer and saxophonist of the band Aka Moon. He has often worked with choreographers such as Alain Platel, Anne Teresa De Keersmaeker,  the Samoan Lemi Ponifasio, the Congolese Faustin Linye. In opera, he already worked with Philippe Boesman-Luc Bondy, in theatre with Tg Stan. His close collaboration with KVS, the Flemish Royal Theatre, led by Jan Goossens, was followed by an artistic residence in the opera De Munt La Monnaie (Brussels) led by Bernard Foccroulle. Since 2012, he has been artist in residence at the Fondation de l'Abbaye Royaumont near Paris to continue studying world cultures, his latest creation being AlefBa with musicians from Egypt, Syria, Lebanon, Iraq and Turkey.
His particular interest in non-European music started after a trip to the Aka pygmies in Central Africa in 1992 and expanded to Asia (especially India) and Africa where he worked with the diva from Mali Oumou Sangare, the Griot Baba Sissoko and the Black Machine, the Indian master of percussion U. K. Sivaraman and the Senegalese Doudou N'Diaye Rose. As for the improvised music scene, he worked with Marc Turner, Robin Eubanks, David Gilmore, Magic Malik, Marc Ducret and Joe Lovano. Together with DJ Grazzhoppa, he created the first big band with 14 DJs and participated in the concept of the aulochrome, a new polyphonic and chromatic woodwind instrument built by François Louis. He passes on his extensive knowledge of music from oral and written traditions, of chamber music or symphonic work in workshops and master classes all over the world.

With the Requiem (working title) Alain Platel and Fabrizio Cassol continue a collaboration which began with vsprs in 2006, and was followed by pitié! (2008) and Coup Fatal (2014). They are both kindred souls in the way they write new stories with familiar materials. The classical European repertoire is a source of inspiration, a starting point to venture out from and create a new universe by means of so-called métissages. In this new performance, the point of departure is Mozart’s Requiem. Cassol, who is always on the lookout for métissages in the music, assembles a band of African, Western and Oriental musicians for the Requiem, with whom he has worked on previous productions. Using vocals and instruments, they reconstruct the Requiem, mixing in their own influences with jazz and opera.

On a theatrical level, Alain Platel and the group are looking for a physical and visual translation of the themes of death and farewell rituals. In addition to the musicians, two actors/dancers join the group on stage.

For several years Fabrizio Cassol has been concentrating on this form, said to be innovative, between concert, opera, dance and theatre. It brings together several artistic necessities and commitments, with the starting point of previously composed music that follows its own narrative. His recent projects, such as Coup Fatal and Requiem pour L. with Alain Platel and Macbeth with Brett Bailey, are examples of this.

Fabrizio Cassol has been in residence at the Camargo Foundation on several occasions since 2019 to work on I Silenti, his new creation with Tcha Limberger, directed by Lisaboa Houbrechts.

“I Silenti proposes to be the poetical expression of those who are reduced to silence, the voiceless, those who grow old or have disappeared with time, the blank pages of non-written letters, blindness, emptiness and ruins that could be catalysers to other ends: those of comfort, recovery, regeneration and beauty”.

The Intercultural Medinea Sessions of the Mediterranean Youth Orchestra (MYO) are open to young and talented musicians from the Mediterranean basin (building their careers to become professional artists) and who have an intense practice of musical improvisation, even of the composition. Each session is designed for a large diversity of musical aesthetics and Mediterranean expressions and hosts all styles of music using elements of improvisations (jazz, traditional music, early music, etc.).

Fabrizio Cassol guides these sessions and proposes to experiment with techniques of collective composition, within an ensemble, with the aim of leading to the creation of a common musical production which also reveals individual singularities. This training offers a unique intercultural experience of the life of an ensemble in creation, in rehearsals and on tour.

Since 2018, the Camargo Foundation has been part of the tour by welcoming concerts in its amphitheatre.

Broadcasting of the concert by The Mediterranean Youth Orchestra on #LaScèneNumérique platform of the Festival d'Aix, July 13, 7pm 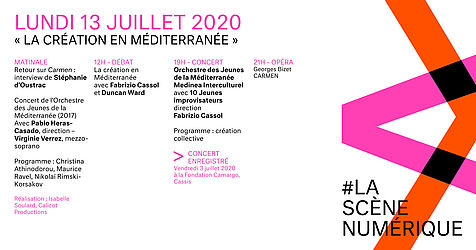 After two weeks of intense creation, and in an exceptional configuration due to the health crisis that forced some of the musicians to work remotely from their confinement while the others were on site at the Camargo Foundation, the Mediterranean Youth Orchestra, led by Fabrizio Cassol, will be in concert on the digital platform of the Festival d'Aix-en-Provence, #LaScèneNumérique!

Camargo is looking for a Communication Assistant position